Many times, the start to being better begins with a visit to the doctor. When you have my level of problems, you might have to see more than one doctor. Today I went to the second doctor involved in treating me. And I left a little more frustrated than I had hoped. 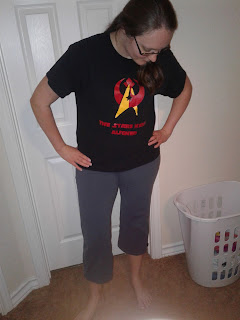 *Do these pants make me look fat?*

I have a lot going on in this body of mine. It is trying to fall apart before its time. I'm 30 years old. Not even in the "prime" of my life. I'm "young" according to my primary doctor. What I should have told her was, "Only on the outside." Inside is a different story. She did an EKG and stress test to see if my blood pressure fluctuated as I went from laying, to sitting, to standing. Those two came out normal. So she thinks my heart and blood pressure is all good. Well, I'd certainly hope so. Bad enough my spine wants to collapse, don't need my heart giving out on me too! I left her office with a stack of papers and my pain level being 2 notches higher than when I went in thanks to laying on the examining table. Those papers were all the tests and appointments she wanted me to go to before seeing her again in two weeks.

Yesterday I gave blood to do 4 tests. Not sure what all of them are, but I know one was to check my thyroid and 2 were Lipid tests. I'm assuming it will help her see if there is anything basic causing my dizziness and pain.

Today I went to see the neurologist. He asked many questions, told me he thinks he knows what is wrong with me and then checked my reflexes. In short - I am fat, don't drink enough water and need to consume more salt in my diet. Okay, that is the ultimate way to describe the long conversation we had. In his words, I need to tone my butt, thighs and calf muscles. When I stand too long (because to him, having 4 kids must mean that is what I do all day) or rise from standing, all the blood is going to those muscles and not to my head, causing me to feel lightheaded. As a woman, I am a part of the majority of women who suffer from Vasovagal Syncope and are prone to fainting spells. It's quite common. Even though - and he asked - I never fainted in my teen years. When I asked what that was, mostly because his thick Indian accent was throwing my off understanding of him, he asked what level of education I had. Why does that matter?! I know enough to know what he's saying, but only when I understand the words through his accent. Then he asked if I breathe fast when I feel this lightheadedness come on. No, I do not. I know not to hyperventilate. It brings about fainting. I try to avoid that at all costs. It is why I haven't fainted yet. He says women hyperventilate subconsciously. "Perfectly normal", he tells me. What part of, I don't breathe faster did you not understand? He told me that I must also be dehydrated as I do not drink 6 bottles of water a day. And I need to add salt to my food more often. I avoid adding salt. Heart disease runs in the family on my mother's side. I thought not adding salt might be better for my long term health. He told me repeatedly that he knows all about this as he speaks at conventions on it and has written about it. It is what most women, and a few men, suffer from. What I wanted to tell him is that he suffered from an overinflated ego.  Then he wanted to know about my depression and anxiety levels. I was honest. I feel down sometimes when I get frustrated with my body. I feel I should be doing more, but pain restricts me. I don't, however, battle depression. I also do not feel continuously anxious. Yes, I have stress in my life. Yes, I worry at times. I don't let it keep me down. But he told me women are more likely to have anxiety issues and not realize it.

So blood is being restricted, but only because it's going south and not to my head. I need to lay down and sit down when it comes on, but he did not tell me why it would happen when I'm sitting. Also, why did it used to only happen when I turned my head to either side and now it happens whenever without a trigger? I asked him if it could be that the tension and curvature of my neck has anything to do with it. His reply was no. If a water hose has blockage, then water doesn't come out at all, he said. Sure... but what about the hose that gets the occasional kink? You twist a hose the wrong way, water is restricted. But no. He knows this better than anyone. This is surely the cause. In 6 weeks, I go back after changing my workout, drinking 6 bottles of water a day and adding salt to my cooking. He expects there will be a decrease in dizziness. That I won't feel like fainting. And if not, he will refer me to a neurosurgeon.

I plan to tell my primary that I do not agree with the neurologist. I think he is letting his ego think for him. He wants me to also take pain pills every night before bed. He says that the pain and lack of sleep are causing me anxiety. That I probably have heart palpitations more now, but don't realize it because I'm too worried about not fainting.

We do not have to always agree with the doctor. They won't always get it right. If it feels off, think about a second opinion. And don't fear speaking up.

Tomorrow is my MRI. 30 minutes of laying inside a hard tube... The last one I had hurt like crazy and had me leaving in tears. Let's see if I am any stronger this time around, shall we?
Posted by TheNerdyUnicorn