Are my kids trying to have me arrested??

In these days, more so than before, parents can easily be accused of child abuse. Broken bones, bruises, neglected head lice, even! Society has laid out what kids should be like. Being in the digital age, we except kids to docile and zoned out. Not mine...

My son got off the bus with two marks he didn't have when he left for school. 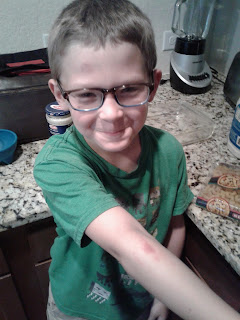 He had a roundish mark on his forehead that looked like a bruise. And then he had a red mark on his arm that looked to be a mix of a bruise and a bite. Yes, I was quite concerned. And then I got this answer to my query, "I did it to myself." WHAT?! WHY?? "I wanted to."

Fast forward to later that afternoon. Homework was done. Showers had just been wrapped up. They were playing a little Minecraft while I completed dinner preparations. I hear thudding down the stairs from that same son and then CRASH! He had tripped at the last steps and planted his side into the stained concrete floor. He hit the side of his head at the ear, so that his ear was smashed on his glasses. Now he has a huge, swollen, ugly, purple bruise. 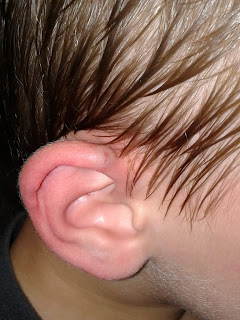 His knee had connected to the floor, giving him an ugly red swelling point there too.

*Mentally banging my head against the wall now*

Out comes an ice pack and admonishment to not run down the stairs. Again. I also informed him that if people saw him right now, they might have 1 of 2 thoughts go through their minds.

1. This kid was in quite the fight.
2. This kid gets beaten by his parents.

My older daughter is also one I worry about for this reason. She is naturally clumsy. Falling, tripping and hitting herself happen regularly.If I had a dollar for every band-aid we have needed for her... And that brings me to child number 4. 10 1/2 months old, this girl can't stay still. I can be holding her and she's trying to do back flips from my arms. Or turning the furniture into her own personal jungle gym. 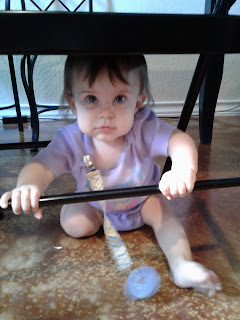 I had a picture I sent to her father one day when she got mad that I put her down when she was sleepy, and she had headbutted my computer desk. Looked like she had a black eye.

As parents, we try to protect them from danger. However, we also want them to be strong and be able to handle some pain. Scratches, light bruises, scraped knees. You can't protect them from everything. Not unless they develop some kind of special bubble wrap we can encase them in. One day, right? Until then, we have to do everything we can to keep them alive and avoid Child Protective Services when they take being a kid to another level.
Bubble wrap... Reminds me of the Chuckee Cheese ad....