We are down to the wire, ladies and gentlemen. If you haven't finished your Christmas shopping yet, you better get a move on! But what to get? So many options out there. I have one suggestion if you have children in the 6+ age range.

*Disclaimer: I was sent these products free of charge in exchange for my honest review and to host a Bakugan party. I was not otherwise paid or endorsed for them. All opinions are my own.*

I'm an influencer with Tryazon. I host parties from time to time and in exchange, I get to try out various products. With that being said, Christmas time is here and it is when people are looking for great gift ideas.  There are a lot of toys out there. But few truly capture my children's attention. Especially in comparison with video games. When these Bakugan products arrived, all my kids were excited. Which made me excited. I limit screen time as much as possible. They get tons of that in school now. They need more hands on things to work their imagination.

So what is Bakugan?

Before hosting this party, I didn't really know much about Bakugan. I knew they were some kind of battle toy, and likened them to Beyblade. My husband knew about the show, but not much beyond that. They are way more fun than that. These are animal characters. With different attributes. Spin Master puts them out. Spin Master has been making amazing toys since 1994. They are also the producers of the shows Bakugan: Battle Brawlers and Paw Patrol (which is a show all my kids loved). The Bakugan start in ball form and you roll them into battle, which triggers them to spring open when their magnets go over the BakuCore pieces. But they go further than just the toys. There is a show. There is a YouTube channel. You can dive deeper into their world. Heroes and villians, and factions - not to mention the card game that goes along with them. My kids love card games. From Pokemon to Yugioh, they are branching out. So of course this catches their eyes.

What we thought about them. 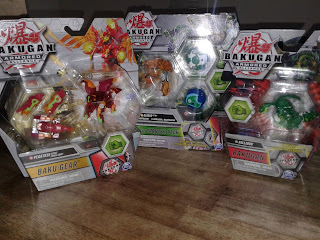 We received three packs. There was the Bakugan Starter Pack that came with 3 characters: Sairus Ultra, Fangzor x Mantonoid and Howlkor x Ramparian. You get 6 BakuCores, 3 ability cards, 3 character cards, 1 gate card, as well as the instruction and rule sheets. I definitely suggest this one for the first gift. This will get the kiddos started and allow the perfect set to practice with. 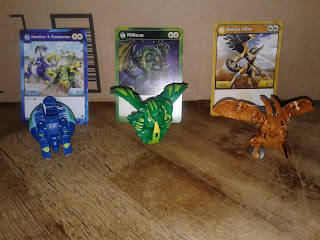 Next, is the Baku-Gear pack. This one had the Pegatrix Ultra Baku Gear set in it. You can add gear pieces that make your Bakugan look more fierce. It also comes with 2 BakuCores, which are the hexagon shaped pieces in the game. Then you have your ability and character cards. This set is for the kid that loves the characters and wants to show off! 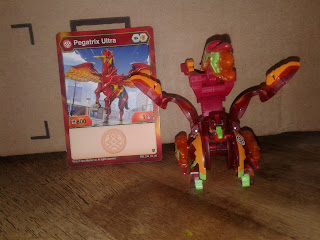 And finally, we have another Bakugan - the Nillious. This one is known as a Gate-Trainer. If you are just looking to build their collection, you will get sets like this. A single Bakugan with 2 BakuCores, a character card, and a collectible training card. 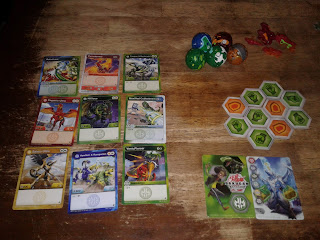 We started by showing the kids videos on the channel. There are the show episodes, how-to's, reviews and battles that other kids have done. It was a great way to introduce them to the game.

I am glad they gave this following video to guide us through the battling process. It also shows you how to use each piece.

Where can you get them?

Target and Amazon provide you these and more of the Bakugan toys. I have also found them at Walmart.You can get many characters and should get the battle arena. It helps to be able to set up and keep the rolling Bakugan from rolling right off the table, as we have learned.

Tell me what you think in the comments below. What would be your reason for getting something like this?