They say love is blind. And usually when people make this comment, they mean it in a negative way. After all, it typically gets used when someone is so "in love" that they miss all the signs that it is a terrible relationship to be in. But did you know, there is another way that love is blind? Love is blind in a great way for my husband and I. 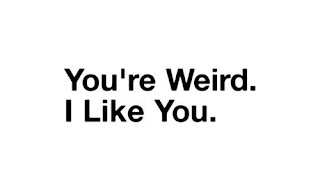 Two days from now, we will have been married for a year. Some people see us and think we are still in the honeymoon stage. I say if that is the case, then may we never get out of that stage. I've known him for at least 4 years. We met as coworkers during our bondage to Target. At first, I couldn't stand him. No, really. I hated his guts. Here he was, another shining star among the drones that Target likes to hire. He could think. He could reason. Here was someone who was catching the eyes of the leaders and that I was afraid was going to take the leadership role I was working so hard to get. Then he spoke. And it was in a language I was very fluent in - sarcasm. Suddenly, I was in awe of him. Suddenly, I wanted to know more about this guy. He came in, kept quiet and worked furiously - better than every other guy on our team. I didn't have to hold his hand. I didn't have to keep reminding him to pick up the pace. He kept up with me just fine. It was not love at first sight. But boy did it grow. We became good friends. Hanging out with him was not awkward. Silence with him actually felt comfortable. We went from hanging out on lunch breaks to me inviting him to our "parties". A bunch of us cooler peeps got together to play video games, swap stories and yes, I cooked and baked. We were all just a bunch of nerds having fun. It was at these parties that I saw something in him that made me like him just a little more. He understood me. He was fun. We shared common hobbies and interests. That doesn't mean I jumped right into a relationship with him, however. Having just exited a terrible marriage, the fear was real that this wouldn't last. That happiness would not ever truly be mine. That didn't discouraged him. He pursued me. After a while, we started going out and eventually he met my kids. I did push him away. Okay, let me rephrase... I tried to push him away. But he was determined. Another trait I appreciated. I constantly voiced my insecurities and ideas on why we wouldn't work out. And he had reassurance for each one. Fast forward to today, we are married and even had a baby together. Though not in that order. He has become a strong role model to my sons. He became the father all my children needed. And he has loved me blindly the whole way.

It is said that we are our greatest critics. We magnify our flaws from an anthill to a mountain. But those who love us fully are blind to those "flaws". They love us regardless. Passionately. Fully. No holds barred. And he does just that. He stands strong by my side. Through the unplanned pregnancy, losing my job and the ever growing health concerns I have muddled through. He hasn't missed a single chance to tell me how much he loves me. He also doesn't hesitate to show me. I made it clear at the beginning that love is an action, not some gooey feeling and empty words. And he has taken that to heart. He lets me sleep in when I have had a particularly bad night. He randomly cleans things without me saying anything. He buys my pads... Talk about real love. This man will buy the right kind of pads when he knows I'm in need. Like this morning when my second period in less than a month took it up a notch... He doesn't shy away. We have even had conversations about my monthly flow. Doesn't cover his ears or squirm. I've gained weight - 40 pounds to be exact - since he fell in love with me. Yet, he still tells me that I'm beautiful. Not with the hope of getting something in return, but because he truly means it.

Love is blind. In more than one way. And the blind love we have is beautiful.
Posted by TheNerdyUnicorn