A Love For Places Abandoned Has Begun

My husband and I have many common interests. Many of them revolve around being curious. We like to explore. And find interesting places. My husband and his siblings went into a place to look around as kids. It was abandoned and mostly a dump, but the fun was in just looking around it and imagining what it might have been before. The people that had been there before left in a rush. Food was rotting in the fridge and trash was everywhere. Why did they leave so fast? How long ago?
As a kid, my PawPaw and I went for a walk in an area where there was a house that was going to be torn down. It was condemned and full of junk. At least to the outsiders eye. We peeked inside and he reached in to pull out a tiny, shot glass-sized, crystal wine glass. To this day, it is counted as a treasure among my belongings. Who knows what else we might have been able to find, but he was always saying that safety comes first for our adventures. I respected him for that. We talked about reasons that it might have been left in such disrepair. The biggest one being that an elderly person might have been there and died, leaving it behind with no family to care or claim. 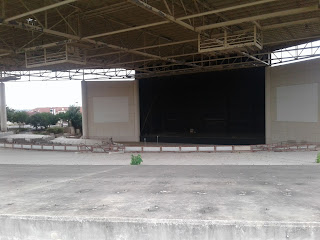 Fast forward, and now we live in a brand new neighborhood. A neighborhood built on the border of a church. As far as we can tell, it looks like they built the church after purchasing event grounds. There is a large amphitheater there. The first time we checked it out there were seats and you could climb onto the stage. They have since made changes to it. It is slowly deteriorating along with the other buildings around it, like the concession stands. 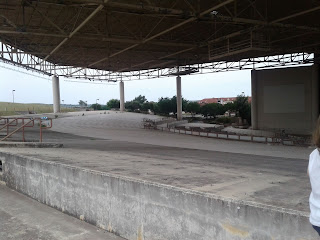 Just starting here, we have come to want to see more places like it. This is why I went looking around online. There are places everywhere. And it is called urban exploration. There are even abandoned military bunkers, missile silos - places that are just no longer needed by the governments. We won't trespass on the properties that forbid such, but there are places that you can see without dangers or guards. Like an abandoned arcade shaped as a spaceship...

I started a Pinterest board of some amazing sights to see one day.

Some of these places have great potential. Potential to be reused. Given a new purpose. Like old malls or apartment buildings. Can you imagine if they were renovated and devoted to the homeless population? After all, they are not being used. Why not? Well, aside from people being greedy....

If you could go anywhere, abandoned or not, where would it be? Let me know in the comments below!
Posted by TheNerdyUnicorn