Last weekend, I had thought up some great things we could do to fill up the spring break week. My kids and husband were all out of school. But that doesn't mean that there would be a lot of relaxing going on. While we can't afford to go to any parks or take a mini vacation, we had talked about doing other outdoor things. We have a rocket we could shoot off. We have drones to fly. There are free parks with trails we wanted to walk. We had a family picture that was in the works too. Granted, we also had things we needed to do. Like grocery shopping. And changing the van oil. Mowing the lawn... Not the most fun, but in need of doing.

Monday came around. We made it to the store. Couldn't get the lawn mower to start and the weed eater was out of string. But that is where doing things ended. I spent most of the day curled up in bed. I had shooting pains through my head, sporadic pains throughout the rest of me and then so much dizziness that I was sick to my stomach. I felt like my pain sensors were on the fritz. And as though I had just gotten off a roller coaster.

Tuesday we managed to get the family picture done. As soon as we got back home with a tired and teething baby, it all hit me again. This time with my neck so tense that it hurt to move. Once again I ended up in bed.

Wednesday started off better. We took the kids to a different park. Stage Stop Park is actually really nice and had plenty of choices for the different ages. If you are around the Selma area, I highly suggest it. We stopped by the store to grab ingredients for peanut butter and banana milkshakes. Mmmm we love them so! After getting home, we played some games. I thought I had escaped the torments for a change. I was wrong. As it came time to make dinner, sharp pains plagued my head. My husband once again urged me to sit down and take it easy. His worry has been quite evident. Here's the thing... I don't want to sit on the sidelines of life. Granted, there isn't much I can do until I find out if I am approved for a local assistance program. My oldest son started complaining of pain in his ear after dinner. My baby has been battling fevers. She sleeps randomly and eats on and off. I thought it was due to teething, but as of Wednesday night, I had second thoughts. Her temp was sitting around 100-101 on average.

Thursday was again unkind, starting around lunch time. But I pulled my wits about me and determined that I would not let it slow me down. We took the kids to shoot off a rocket in a field near our home. They learned how baking soda and vinegar reacts when mixed. Then they wanted us to play tag... My back and neck hurt while my husbands foot threw a fit. We are getting too old for this. After that, I was done. The lightheadedness came in waves for the rest of the evening.

In an effort to "take it easy", I started painting too. Super relaxing. 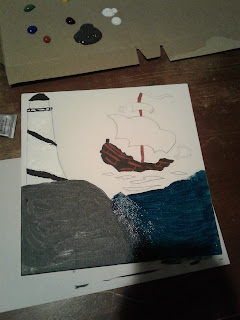 We will soon be leaving for my Mother-in-laws and I'm sincerely hoping to keep steady until we return on Sunday. After all, I am not the kind who enjoys it when loved ones watch me in my weak times. I prefer to put on a strong face.

Besides giving my husband stomach ulcers from the stress of seeing me like this (or at least I worry he will end up with them), I think my kids were likely to suffer from cabin fever if we hadn't gotten  out and had fun.We have a few more days for those things we can't do during school days. I want to fill them up as best I can. But I think I will have to take the action down a knot. Really hoping that Monday brings us some good news towards getting healthcare assistance.
Posted by TheNerdyUnicorn