The Lesson on Curse Words

Yesterday was a typical Monday. Busy with simple things until the kids got home. Then we dove into homework, making dinner, and awaiting my husbands arrival home from school. While I was putting the final touches on dinner, I heard a word that is forbidden in our house.

Let me just say, that my husband and I don't use curse words. Not unless there is a sudden and extreme pain inflicted. And even then, we usually scream it in our heads or say something else like "mother of fudge" or "freakin A". So, our kids are not likely to say such words without having learned them from an outside source.

So there I am, cooking. I hear my younger son saying a word while playing a video game. At first, I thought he was saying beach. Except it was contorted. Then my older son says, "Mom, Allen said a bad word!" I asked Allen and he acknowledged he had, but tried to say he didn't know that b*tch was a bad word. In an effort to keep my cool and get to the bottom of it all, I ask where he heard that word. Of course, he had heard it while visiting my ex husbands house. They were watching YouTube videos of guys playing video games. I also found out that when the guy playing had something unexpected happen or he lost, he would exclaim curse words. So guess what the dinner table conversation was about? You got it, curse words. We had to discuss what they were, what they meant, and why they are inappropriate and will not be tolerated in our home. We covered quite a lot of ground. My kindergartner and second graders all now know that those words are not allowed in their vocabulary. They already knew a couple of them. After all, they had dropped the F bomb on me a few years back after visiting my ex husbands family. Then another word came up after being with the babysitter. Now, they have about 95% of them known. Along with meanings, good and bad. What has the world come to? When did kids so young start hearing such language used around them? 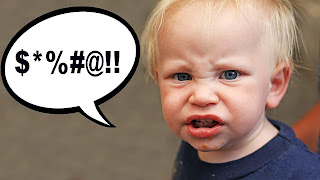 Today, my oldest started asking about a couple other words we hadn't covered yesterday. Apparently, the bus/school bully uses some pretty heavy language. I had to explain what the MF word meant and why we don't say it. (Didn't get into too heavy detail on what the F part actually meant.) And the word A$$ brought up the tally to 95%. Why? Why are kids hearing this regularly? What happened to covering your kids' ears when you had to curse. Who remembers when that happened in the movies? My parents muted certain parts of movies when they knew a curse word was coming or made an extra loud grunting noise to sort of show it was a bad word. Are we conditioning our kids to use the language of adults and expecting they will do so the right way and when acceptable in public?

My husband and I have become disheartened by the way things are in the world. So much so, that we have been talking about homeschooling the kids. Especially since I'm not working anyhow. We got the bullying situation under control, then were faced with ridiculous homework pages. The information they are teaching the children is not only beyond what he and I learned in school, its pretty useless. And now we have to worry about what they are hearing. And did you hear about the Mom who is facing felony charges because she put a digital recorder in her daughter's backpack to get proof on the bullying? I think that school should be investigated. What could they be hiding that they would call the police on the mom for that?! Thankfully, the school wised up and dropped the charges.

I just don't know where to go with how things are working out for our children in the public school systems. Things have changed so drastically than when I was in there. It is more and more like a dangerous prison for kids, than an institution of learning.

What are you thoughts and what are you dealing with? Do you think your kids should (or others') should be allowed to curse if you do?
Posted by TheNerdyUnicorn