Getting Organized. One Space at a Time.

My mother is great with her suggestions on organization. She watches more YouTube videos than my kids do. But always with a purpose. Recently, she told me to check out ClutterBug. I'm glad she did. That lady knows her stuff! She takes about 15 minutes a day to go through a place in her house and declutter. And it has been an eye opener for me.

She has been doing this in a 30-day challenge set up. I've had to play catch up to some degree, but its worth it. I would suggest you take it in stride. Subscribe and get the notifications. Then get started. Watch the videos to the end to get some humor as well.

Day 1 was to go through under the kitchen sink. My kitchen sink will never be so tidy with the buckets. But I did organize the types of cleaners I have. And was able to pull out a piece of trash and some scent stuff we will probably never use. Everything we have is easy to see and grab.

Day 2 had me going through food storage. While I only had one container to get rid of, it helped me to organize those plastic containers that I use often.

Day 3 was to go through your dishes and bakeware. Again, we really only have what we use regularly. But I still took a look. 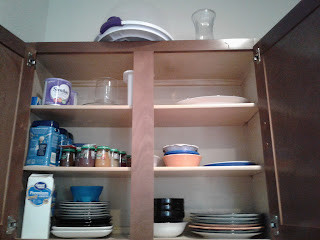 I found 2 lids to pots that I had tossed a while back. It gives you a chance to decide if you need it or just hold on because you can't let go. Or do you need to rearrange? Now is the perfect time. I know there are couple things my husband and I disagree on when it comes to tossing out. He has a panini maker press thingy (we have not used a single time since being together!) that he refuses to let go of. Then there is the vase at the top of the cabinets. He says I should keep it in case I get flowers (which was once...? back when we started dating?) I see no purpose to them, but he says no when I bring up donating them. "You never know" is usually the response. 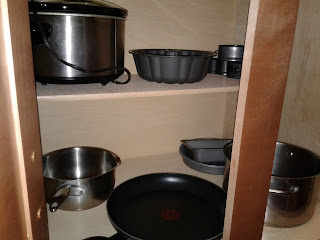 Day 4 is that utensil drawer. I had a couple things in there that I really don't use. I had a bunch of kids utensils. You know the little character ones? My kids have outgrown them. So I decided to hang on to a couple for the baby and donate the rest. There were several... I found this in there. Anyone want to take a guess as to what it is? How about what it could be used for? 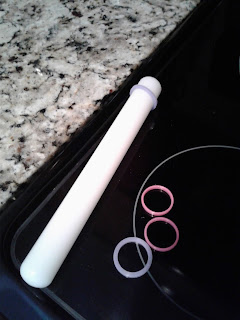 Day 5 I looked in the fridge. We don't often have foods left over, and even if we do, they are usually eaten within a day or two. Unless we all can't stand it... Which is when you bite the "waste not, want not" bullet and say its time to go. Toss it out if you know no one will eat it anyways. Why grow a science project before letting it go?!

Day 6 is when you jump into your freezer. How many of you buy something and try it only to find that everyone in the family hates it and it will never get eaten again because it is just that gross? But you tell yourself that the bag is nearly full. And how can you waste it? What if there was a way to make it better? Yeah... I did that with some meatballs. And cheesy chicken nuggets (Tyson). Those things were never going to be eaten by us. No matter how we tried. They were gross. So I tossed them. And felt better. Plus, I had more space!

Day 7 was the pantry. I pulled out some crackers that had been there since my family visited for my wedding. It was a while before I realized they were even there to begin with. And every time I reached for crackers, I forgot about those. They were so stale when I finally did this... I also pulled out some canned beans. My kids and husband don't like beans. I buy them, intending to put them in my chili, but only I will eat them. So out they must go. That was all I had that we won't ever use. I'm frugal with my grocery shopping. I only buy things I know we will use.

Day 8 is one I still shiver at. The junk drawer. *wants to melt into the carpet* Mine looked like a dangerous zone to traverse. 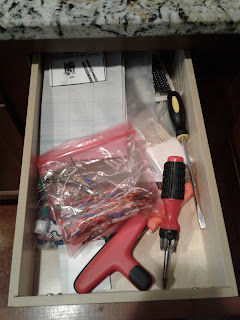 And its never so neat as hers was. I have manuals in it that have to stay with the place (we rent). I have twist ties in a baggie (we use these daily). There were tools and a chip clip.... I hate the junk drawer. Mostly because it is so chaotic. I do love how she tells you to test out pens and markers. How many can you find that have no ink left in them? Why do we throw them back in the drawers or desk cups?! Thankfully, we don't keep writing utensils in the junk drawer. Sadly, my "junk" isn't what really goes into this drawer either. But at least it looks a little better. 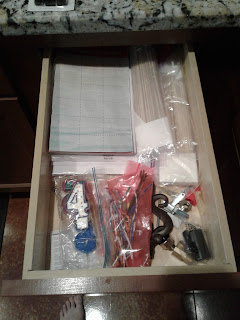 I pulled out my husbands tools to go in the garage. I moved everything around to fit better and be more visible as needed.

Day 9 is when you check out those linens. We don't have a set place for linens. Each kids room has sheets and blankets in the top. All of them should/could be used. But I checked anyhow. And I got to thinking. I'm washing their bedding so often, they don't need more than 2 sets for each boy. So while I only have that many sheet sets as it is, I did have 6 fleece blankets for them. I decided to pull out 2 of them. The adults linens are kept in a tote in my closet. 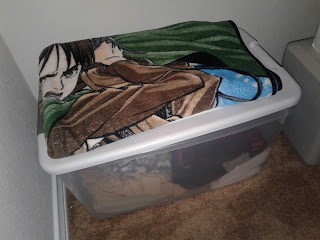 Plus there are our towels. Adult towels are in the top shelf of my closet. We have a lot of them, but my husband says to leave that number as is. So I don't take from the stacks. The kids have a stack under their bathroom sink. They have enough that I don't need to take from that stack either. Its enough to keep stocked and have extra for times when they get sick. I can clean out a full stack when a virus hits them like nobody's business.

This is where I'll stop on this post. I will continue my organizing spree in another post to come. Don't forget to let me know what you think that thing is that I found in a drawer in a comment below. Or better yet, what use would you have for it? And what is the number one place that you hate having to clean or organize?
Posted by TheNerdyUnicorn