What have I done? I have raised a nine year old geek! And I'm so proud of myself!!! Okay, but seriously... My oldest turned NINE YEARS OLD today!!! Where has the time gone? I feel like just yesterday I was screaming into the doctors face that if he would step a little closer, I'd kick his face in. 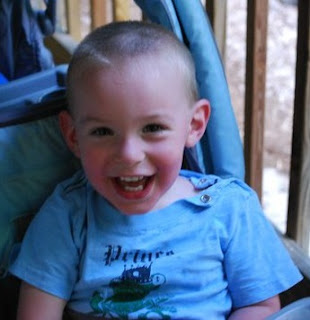 Giving birth to my oldest rewrote my understanding of pain. I'd take spinal fusions any day in comparison. And the fact that I was also worried about my babies life (that night before he came was very concerning to say the least), only amplified my will to bring him in to this world quickly and safely. I was in labor for 25 hours. I forced them to induce me after having blood clots an inch thick and the size of a half dollar drop out from between my legs the evening before. I freaked out. I thought I was losing my baby even though I was technically full term. They had kept me under observation for 12 hours, though I never saw the doctor during that time. Then they told me to go home. No explanation. Just said I was fine. When I mentioned the blood, they acted like they didn't know what I was talking about and said I was probably losing the blood that pools "down there" since we don't have periods when pregnant. Now, I'm not a doctor. I have no medical training. Maybe they were on the up an up. But in my gut, I felt differently. I told them they had two options. They could send me home and I would stay there the next time I went into labor. I'd have my baby alone in my bath tub and be all the happier for it. OR they could induce me. They chose to induce. Hmm...
There is a reason women prefer to go naturally and not be induced. It really is the worse pain in the world. You start off good. Then you are slammed by wave after wave of excruciating, ab-tensing painful contractions. I had told myself I was going natural. Its safer. Its healthier. I lived through three spinal fusions. How bad could giving birth be?
I was dying. GIVE ME THE EPIDURAL!
You know what the anesthesiologist said? No. I'm not touching you. WHAT?! No epidural for this momma. Ever. My spine is cause for pause with them. One wrong move with that needle and they will paralyze me. So I went ahead. Full steam. Screaming and writhing in agony. With a deaf husband standing at my side, frozen in panic and a face that said, "I did this?" That was the only time I saw repentance in that mans face in all the 7 1/2 years we were married.
When the time came, the doctor finally came in. I'd been there 24 hours and then some! HE FINALLY WALKED IN! He was a prick. It was time and he strolls in asking how I was. I started screaming with the next contraction to answer his question. He tells me to shut up. "You need to stop screaming and save your breath to push." No, what I need is for you to step a little closer so that my foot can be planted squarely in your face. The nurses wouldn't allow my mother in the room with me either. They said it would be too many people. My mother warned me to let it go. She didn't want the nurses to be ugly to me if I was stubborn about something. I still regret not having her there. Might have made the time go easier. Might not have. But she should have been given that option.
Then I started bleeding out. I went into shock. No one seemed to notice. I told my husband to cover me with a blanket. Then the doctor says, "You bled out and went into shock a little." No, duh, Sherlock! I couldn't hold my baby. Turns out, I tore. My doctor didn't help ease the baby out as he crowned by massage the passageway. Then, he said that after I tore it wasn't open enough so he needed to cut me open a little more. Talk about wanting to murder my doctor! (He wasn't even MY doctor. He was my doctors husband!)
I lay there. Crying. Watching them with my newborn across the room. His father was cutting the cord, holding his hand, helping to wipe him off. And I lay there shaking, just watching. It was torture. Then he brings this little bundle to me. And suddenly, the world could've disappeared and it wouldn't have mattered. I felt nothing of the pain anymore. I saw my son. So little. He was the most beautiful sight in all the world. I know every mother says that, but its true for each of us. Everything fades away when you see what you accomplished and hold your baby for the first time. I wasn't able to hold him for a while, but he at least laid next to me. And I was happy. I lay there, happy. The doctor sewed me up, congratulated me, and I never had to see him again. 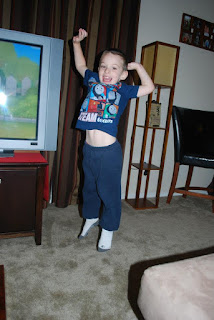 At 4 years old, this boy was and still is full of energy!

Fast forward to now. He's in second grade. He can do triple digit math. He LOVES Star Wars. He probably knows it a little better than I do. Great at spelling (chip off the old block!). He's embracing a love for Star Trek as his step father is teaching him how it is better than Star Wars...
And I could not be more proud. This is my little man. Growing up. Too fast. A lover of people.


He stole my heart then and he holds it even now. 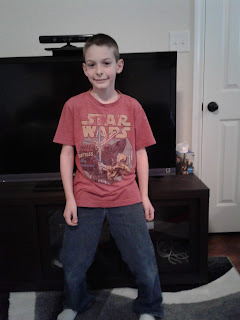