And there were lice...

We have had a wonderful summer. Hard to believe it's coming to an end already. Monday is when my kids head back to school. With that being the case, I decided to get in as much fun as we can before then. Today, we went shopping. We did some crafts. And then, we went to the mall. While at the mall, my husband and I noticed our older daughter scratching the mess out of her head. She was really going at it. And when I asked her about it, she replied that part of her head just itched a lot.

I don't know about you, but I grew up with very long and thick hair. When I was in public school, my hair was touched often by a lot of hands... And I came home with lice often. So often, that my dad even threatened to shave me bald. All of my stuffed toys, even one that I treasured, were tossed out. Bedding was stripped and washed. And I went through the long night of Rid in my hair while my mother combed through it with that sharp, fine-toothed comb. Far too often. My mother said it was about every two weeks. And I hated it!

So you can imagine the dread I felt when I thought, please don't let it be lice! I told myself that maybe she was just sweaty. Maybe she hasn't been washing her hair too well. Can't shake a Mother's wisdom though. We got home and the purging began right after dinner. 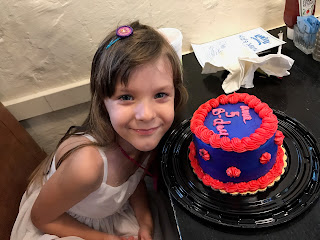 I started by looking through her hair. If you don't know, the sides of the head close to the ears, slightly above and the base of the head at the neck are the two spots usually affected by lice the most. I checked the base first. And boy was I shocked. She had eggs, or nits, EVERYWHERE! I grabbed the bottle of Rid I had from the last time we had to deal with them and got to work. We boiled water to dip the comb in after each stroke through her hair. They don't like heat. Like serious heat. So washing bedding and drying it in heat kills them on bedding, clothes and stuffed toys. Dipped the brush and combs into boiling water also kills them. Otherwise, they will maintain a tight grip. I call it the death grip. The eggs are attached to strands of hair in the same way. It takes a very fine comb to get them off. That's why you have to use the Rid version that comes with the special shampoo.

The shampoo has an awful smell and goes on dry hair. You douse every inch of it and rub it onto the scalp. Then you take the comb and go over each hair pulling everything out. 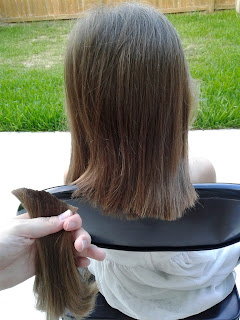 I think it took me at least 2 hours. Plus, I had to cut her beautiful hair. She had long locks that went down to the bottom of her back. Now her hair is right at her shoulders. She looks adorable, but still. As a Mother, I want to spare her from this. I mean, honestly! How did she get them when she hasn't been at school? We haven't been out much. And she is the only one that had them. I checked the boys and the baby. Nothing. I ran the comb through my own hair and only found a ton of dandruff. My scalp is dryer than the Sahara right now... So where is this coming from?? I told her that she must wash her hair. We went over the proper way to wash it (again). I explained the importance of it. And she cried. No one likes having this happen. Her brothers shied away from her when she got close. I helped her wash out the Rid and then I checked her head again. Can you believe that there was more? I had to comb through her locks once again. Pulled out more eggs and more lice. Thus, I started my tasks all over again.

While dealing with her, I also had a load of her bedding running on the sanitizing option in the wash. I have about 2-3 other loads to follow tomorrow. My boys were cleaning up their room, picking up toys in the living room, and taking turns helping with the baby who was so tired - that she just wanted to scream at us. My husband was trying to get some sleep before work. I have a dishwasher to empty in the morning, a load in the sink needing to be done, and will have to check her hair again. I'll wash it one more time to be sure. It feels like I'm standing before a mountain of chores. All of them needing to be done. And none of them appealing to me right now. The good news is, this is happening before school starts. I would not want to be in this mess during school days... 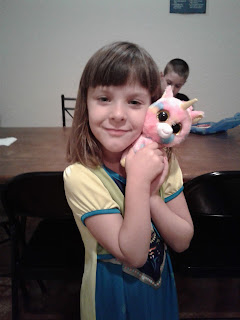 A word to the wise, if you see them scratching - get checking!
Posted by TheNerdyUnicorn