InboxDollars as a side hustle?

While being unemployed, I thought I would try some of those make-cash-on-the-side hustles I kept reading about. Penny Hoarder is a big one that posts about them. And one way was to take surveys online. InboxDollars is one site that you can sign up to use and earn cash through survey taking.

They also have cash earning games and videos.


Here’s the kicker though. You can’t cash out until you earn $30 minimum.

Most of those videos only earn $.01 apiece and are around 3 minutes long. Most of the surveys I try to take, I don’t qualify for. Even some they suggested I take, were closed or I didn't qualify for. What's the point of me answering 5+ questions and then being told I don't qualify, so here, take this one instead? Especially when I was asked those questions at sign up to gauge which surveys they should suggest later on.

Due to bonuses around my sign up, I got up to $8.54. Whoo! Haven’t earned another penny since. And they spam up my inbox with survey offers and Paid Emails. Those are the emails that work like ads for certain companies. I’m all for hustling on the side, but as a mother I don’t have time for pittance-earning side deals. Nor do I see their "challenges" worth getting excited for. 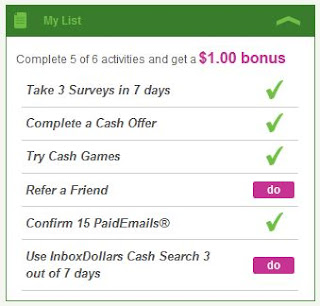 This hustle works best for those with time to kill. For those who have nothing else to do all day. And who fit into the rare type that they need information from. So if you are a white woman, in the 25-30 year old range, who’s household makes roughly 25-30k a year – you most likely won’t find surveys that they need your opinions.
Posted by TheNerdyUnicorn