A decision not made lightly

I have been happily divorced for quite some time now. For about 7 ½ years, I battled depression during the physical, mental and verbal abuse that was directed towards myself and my children. I hated waking up. I hated being home. I hated myself. I wanted to spend every moment I could away from him. Even if it meant working long shifts. Even if I wasn’t with my children. I told myself it was better if I wasn’t with them, because while he was there, the volcano was inching closer to exploding. He had a way with getting under my skin. Still does. He makes snide remarks. He comments on things that he has no right to. All the while, trying to offer “advice” or be “helpful”. I have flashbacks of the time he called my mother fat while saying if she wasn’t she could do more and look better. Or the time he said that my parents had too many kids and because of that, they couldn’t have a “fun” life. Its offensive, but we shrugged it off and told him it was wrong to make such statements. After all, he is deaf. He didn’t have someone teaching him manners, tact or social etiquette because no one in his family truly knew Sign Language. How can you hold someone accountable for their actions when they were never taught? 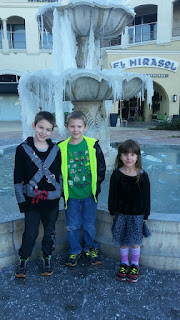 Well, now we are in a new arena. This time, it involves proper care and protection of children. My children. This Friday, his weekend of visitation starts. I dread each time I have to send them to him. I worry the whole time they are gone. Will they come back? Will they be safe? Will he feed them? Will someone kidnap them when he’s not watching? Will he be inappropriate towards my 4 year old daughter? Why do these questions plague my mind? Simple. These are things that I have heard from my kids after being with him. I have video recordings of them telling me about their weekend upon returning to me.


My ex-husband is deaf with no peripheral vision and no night vision. Yet, the state of Texas has given him a license with no more restrictions than he wear normal glasses. Since getting his license, he has wrecked every vehicle he has driven, starting with my van. He even rolled his big truck after falling asleep at the wheel and within about 4-5 hours, they gave him a new one. Tell me where that makes sense. So the worry that he will crash with my kids on board makes me very nervous. He has recently downsized from the big Tundra to a Rav4 SUV. And last time we picked up the kids, we noticed that he had wrecked it. Still has the paper tags! Front and back fenders are both damaged.
He doesn’t wake up to feed them until he’s good and ready. They complain about starving all morning because he ignores them when they try to wake him up. And when he does feed them, it’s usually an array of junk foods. Last time we picked them up, he told me he can’t afford groceries. He uses a credit card to pay for food. How is that possible when he’s not being forced to make his child support payments? He defrauded the IRS starting in 2014. He defrauded Disability starting in August of 2016. So he owes thousands of dollars to each of them. He got a fancy apartment with a nice garage because, as he told a mutual friend, “my truck is important and needs to be protected”. Great priorities when picking a place to live and have your kids over. When the kids are with him, they sleep in his living room. Boys on the floor, Ana with him on the couch. His only bedroom is used for his great Lego hobby. And then there was the time my daughter came home and told me, “Daddy got in the shower with me. I told him not to, but he didn’t listen.” As a mother, you can imagine where my thoughts went. Especially since I knew what he was capable of. After all, she came from the night he didn’t take no for an answer. She says nothing happened, he says she wanted him there. I try to think of it as a misunderstanding on his part.
He had bought season passes to 6 Flags before finding out he owed so much to so many. And since he feels it would be a waste not to use them, he takes the kids when he has them. Great, except for not having money for food and drinks. Much fun to be had even if he leaves the kids unattended while he rides the coasters they are scared of, right? Or he takes the oldest, at 8, and leaves the 4 year old with her 7 year old brother. What could possibly go wrong? Or how about letting them ride alone together and not meeting them where the ride ended? My daughter got hit in the head and was crying while her oldest brother was freaking out and running to find their dad. But all good, as “nothing bad happen”. That is the response I keep getting from him when I confront him about these things. Even after I point out the dangers. Even after I tell him what this means legally. Nope. Doesn’t matter. I’m just an overprotective, paranoid, crazy ex-wife who ruined his life. He tells the kids that it is my fault we are not a family anymore. And sends me a text of a picture that my daughter drew of the family where daddy and I are together again. My children know that will never happen.
So I stepped up. I won’t put him down. I won’t call him names. I won’t point out his flaws to the kids. I will not be that negative influence that paints a horrible picture of the sperm donor they know as their dad. He is doing that well enough on his own. My oldest son has made it clear that he only goes over there because he wants to play video games and because its his only chance to see his dads side of the family. My middle son has asked if he can stop going over there. I try to avoid that question. My daughter says she goes because he treats her like his favorite and she gets whatever she wants. What am I to do?
I tried talking to him. I tried getting his family to talk to him. I tried reporting him to Child Protective Services. None of those worked. CPS actually mailed me a letter saying that they didn’t think it was worth investigating. So I have now decided that I will fight for full custody. I won’t take any more of this. No more waiting for a phone call that something bad happened. Dreading the day they won’t return. I’m going to fight for them. And to help me do so, I started a Go Fund Me. It was a huge decision. One I kept shoving aside. My emotions were all over the place. My fiancé has told me that God is in control no matter what happens. And I believe him to be right. As a Christian, I know that I have to trust that God is protecting them and that anything that happens is a part of His will. As a mother, I struggle. I am gasping for air. I am swimming against the tide. I’m drowning in the fear of what could happen. All because my attempts to educate him have failed. As my Mother pointed out, how can he know right from wrong when he was never taught to be a parent? In response, who will teach him when he doesn’t want to listen to me?