When do you appreciate your Boss?


How many times have you had a supervisor or a manager that you appreciated whole-heartedly? Did you have one that you could trust to go to bat for you? Someone that you would work harder for, if for no other reason than because you had a deeper respect for them than anyone else?
Now did you show your appreciation? When it was their birthday or Christmas, did you get them a gift?
Give yourself a moment to consider this. A great leader is one who leads by example. It is one that you have high respect for, and that you will strive harder for. But how often do you let them know that you believe they are that better person? They deserve to know. Especially as they are few and far between. Managers and other leaders are mostly chosen by degrees, it seems, these days. So few of them have the knowledge or understanding – they lack the connection ability necessary to guide their employees with confidence. They won’t have people willing to go the extra mile on the job unless there is some kind of monetary bonus or kickback they want. This is sad. Leaders should be approachable by everyone. They should have a defined respect from everyone around them, that can be seen by those coming in from the outside.
I’m happy to say I work for one such guy. My manager, Mark or Mr. V. is a guy that connects with his employees. He has managers under him to supervise the departments, but that doesn’t stop him from offering his help or talking to those other employees one-on-one. He wants to see everyone succeed. He knows how to run a tight ship, but his sense of humor keeps the mood light. He is a bit of a prankster, and he can handle getting it dished back. So when his birthday came around this week, you better believe that we treated him with as much as we could muster.
My supervisor took the time and effort to decorate his office, 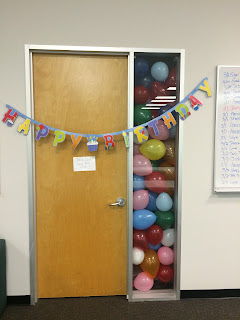 take a group picture that she had a poster made of, 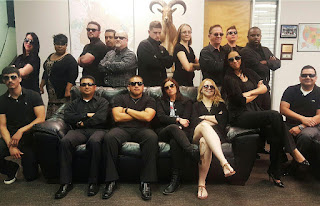 and coordinate with everyone in the office to help in the celebration. 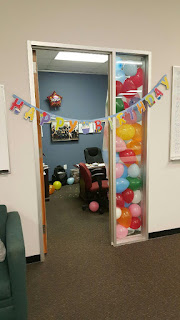 I baked him a cake in the theme of his favorite candy bar, Baby Ruth. 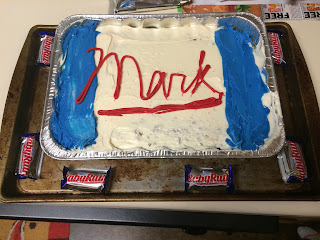 The surprise was a fantastic success. 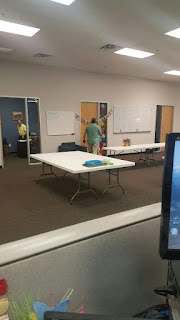 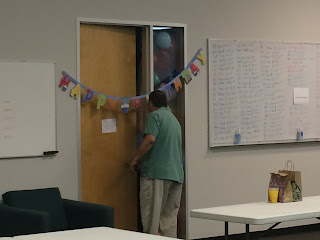 He really did expect the room to be filled with balloons thanks to having the balloons crammed in his window. 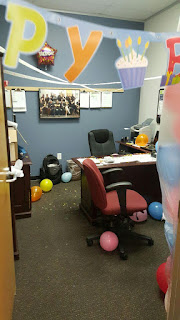 You don't have to go all out, but take the time to show your appreciation. Those worthy of such are a rare treasure in the business world. They need to know how much they mean to others sometimes.