This was quite an amazing story. Bridge of Spies taken from the pages of history, it gives us a glimpse at the types of lives lived during 1957 and the Cold War. Russia and America were at odds with one another. East Germany was trying to claim independence and recognition. Spies were heavy on both sides. Constantly seeking to be ahead of the other in the arms race. Scaring their citizens with the "facts of war". 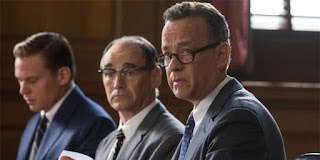 Here we have a great lawyer. He's the best at negotiating. So his partners at the firm decide to throw him to the wolves when the government insists that an accused Soviet spy get a fair trial with competent representation from a respected lawyer. Tom Hanks plays the lawyer, James Donovan. He holds himself to higher standards even when his family is threatened and reviled for even thinking about defending a man who was accused of selling out America. He gets to know the accused, Rudolf Abel who is played by Mark Rylance, as a person. Never once does Donovan ask Abel if he is guilty. Even if Abel was guilty, Donovan merely wants the trial to be fair. The prosocution and the judge both want to turn blind eyes to proper procedures, but Donovan does everything he can think of to keep Abel from the electric chair. I loved the common phrase that Abel would respond with every time that Donovan asked about being worried. "Would it help?" Does worrying ever really help?
As the story unfolds, Donovan becomes a secret messenger for the CIA. He is put in charge of going to East Berlin to negotiate a deal for a trade of prisoners. An American pilot on a secret mission was shot down. 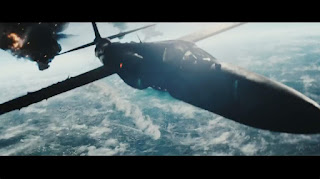 Now the Americans want him back before he gives up secrets about the plane and missions involved. While he begins this negotiating, he learns of an American student who was taken prisoner on falsified accusations of being a spy. Donovan witnesses the horrors of life right after the Berlin Wall was built. It separated families, friends, and was used to esablish dominance by the German Democratic Republic.
His story was amazing. It gives a strong meaning to what it means to be American. To offer the freedoms that even our criminals are offered to a non-American criminal. He stood by his convictions. He went above the call to do what he felt was right for the accused and his country.
The movie itself is family friendly. With some intense action, it might be frightening for younger viewers. It sheds a great deal of light on a dark time though. Highly enjoyed this movie!
Posted by TheNerdyUnicorn