Pour me something strong and lets get this weekend over with...

Only 4:30 PM and I’m ready for bed. No… ready for a strong drink and a movie. Yeah…. Just 4 more hours until the kids go to bed.
This is my thought line about now. I’ve spent the entire day since breakfast cleaning the apartment. 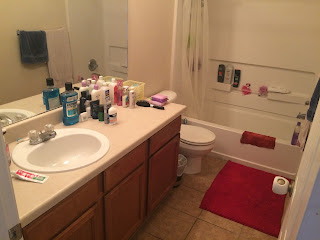 Two and a half bathrooms, kids’ bedroom, kitchen, dining room, swept and vacuumed the floors…. I’m pretty sure I didn’t miss anything. And the smell of bleach was like welcoming an old friend over. Tried playing some video games after I was done to cool down. Somehow it just doesn’t work when you have kids running around screaming or tattling on each other.
What led to my day going this way? How about living with your ex as a roommate who doesn’t help clean anymore? He takes the trash out and babysits. Makes sure bills get paid and occasionally washes laundry (especially when he needs something clean). But that’s where it ends. Lately I find that every time I’m off for a day, I’m cleaning. At first I believed it was because he was incompetent as a stay at home dad on disability. I mean honestly… how hard is it to wash the dishes before I get home? How hard is it to see the trash is full and take it out before I have to say something or do it myself? But this is part of what led to our divorce. I’m tired of having a grown man that has the mentality of a teenage boy for a husband. Of all the jokes that I don’t just have 3 kids, I have 4. But after today…. I’m thinking he’s doing it on purpose. Maybe I’m giving him too much credit, but it seems like he is actually leaving the heavy cleaning for me to do on my days off. My days off are when he goes out with his friends from morning until night. He typically takes the van so I have no way of leaving the house with the kids. What else am I to do then? Clean! Plus he knows I’m OCD about cleanliness. 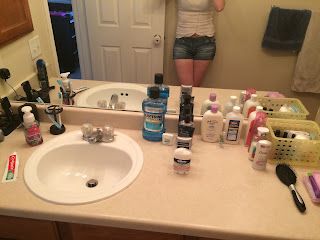 I hit the ground running every day when I get home from work. Washing dishes, folding laundry that was left in the basket, changing a diaper, sweeping the floor. I see something didn’t get done, I get to work on it. Or how about his half-done jobs? You ever hear the saying, don’t do a half-ass job? I’ve grown up with that mentality. You can’t do the whole job, don’t bother trying. Don’t sweep the floor and leave the pile in the corner. You have three kids running around. Especially in a high traffic walkway. How stupid can you be?! I digress… I feel used. Taking advantage of someone's mental strain to get something done is awful. Being OCD means I can't fight the urge to clean. To have order amongst the chaos. It makes me feel disoriented. I'm lost. I feel like I'm living in a dirty old barn.
So I get to work and don’t stop until everything is spotless. Headphones in and ponytail tight. This is practice for the day when I live alone as a single mom of 3 after all. Do you know it sucks? Like really… how you single moms do this daily I will never know. My respect only grows stronger for them. I just want to run away from it. The thought of leaving it all behind has hit me more than once. And lately, more so. 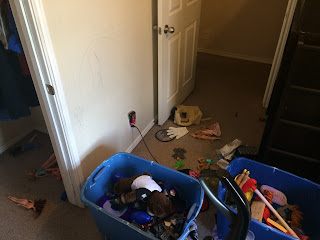 My mind had a chance to think about all those things I try to tuck away and ignore. All the things that I will need to deal with, but I really want to just ignore until they go away. That’s when I realized that I spend my days off cleaning. Every single week. Thoughts then drift to my divorce. What’s left to complete it? How can I speed it up so my ex can officially start dating these girls he’s been asking out? After all, I’m not the psychotic ex-wife that slashes tires, cleans the toilet with his toothbrush, and spreads rumors about his personal habits. Nope. I want him to find someone who makes him truly happy. I doubt he will. After all, he married a modern day Wonder Woman and she wasn’t good/smart/pretty enough for him for 7 ½ years, but still. Having someone in his life will keep him off my case and out of my business. Total win-win if you ask me. The frustration keeps my energy on high until the job is done. I even packed away stuff that sits on shelves collecting dust to make extra space for his Lego mess which has taken over half the dining room. Now I'm ready to cook dinner and pop in a movie with the kids. Once they are in bed though.... Bring on the alcohol. Granted I'm not a drinker. Matter of fact, I had my first drink at the ripe age of 27 years old. And even then, it was only a Smirnoff. Or two... But tonight, I think I'll take it up a notch. Its the weekend, I'm off, children will be asleep. What else would I do to relax? I'd go back to Krispy Kreme for another doughnut... yesterdays free doughnut was awesome! 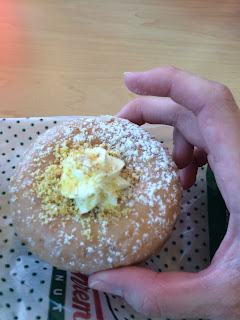 So here's to drinking to forget how crappy the day was... 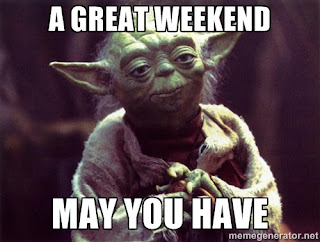