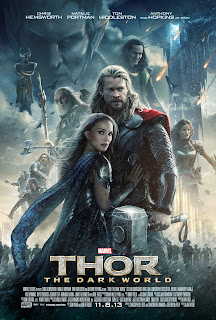 Now that Thor: The Dark World is available to everyone in theaters, I can tell you I saw the prescreening! What. A. Movie! Loki is his devilishly witty self with every part of his scenes rolling the jokes out. Jane Foster, played by Natalie Portman, is a scientist (did you know she really is a scientist in real life?!) who has been mourning the fact that her beloved Thor hasn't come back to her... Even though he did come to New York to save the world. She's as fired up as ever and let's loose on Thor and his brother, Loki. The All Father, Odin, has his hands full trying to return peace to the warring realms since Loki's last attempt at domination went awry. 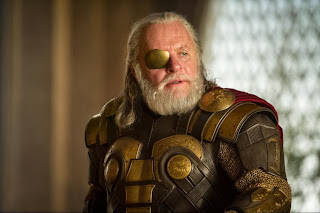 Odin is played by another favorite actor of mine - Anthony Hopkins. And the Queen, Friga, desperately wishes to find the son she once knew in Loki. He of course has turned to bitter hatred and is dripping with sarcastic comebacks.
So what's the gist of the movie? First we hear the ancient history concerning the Dark Elves. They tried to cloak the entire universe in darkness with a special power that can only be unlocked when the realms align. He attempted such, but the previous All Father (Thor's grandfather), destroyed the vast majority of the dark elves and thought he had completely annihilated the threat. Except he had the powerful weapon they made buried deep where no one could find it. But someone does...
In the present - Loki is now prisoner in Asgard.

Peace is being re-established in the realms. A certain scientist is looking for Thor and can't seem to date anyone else because her mind stays on Thor. She finds a nightmare instead. Thor comes back, ready to rescue his damsel in distress. Only he gets more than he can handle. 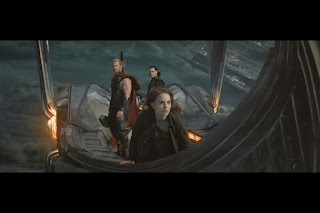 Can he trust his brother (whom he'd have to break out of prison)?  Can he commit treason and go against his fathers law? Or will the entire universe be plunged into darkness and overruled by dark elves and the Kursed?

So much to accomplish before the Convergence of the 9 realms! 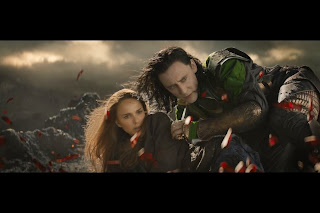 The fight scenes are splendidly done. I saw it in 3D and was pleasantly surprised by all the intricate detail. One of my favorite parts? Stan Lee's appearance! He makes a cameo appearance in all his Marvel movies, and Thor: The Dark World was no different. In this one, Stan Lee is in the mental institution with another returning character who was arrested and put in the asylum for running nude through Stonehenge. I won't tell you, but it shouldn't be hard to guess.
Now I'm no expert and never read the comics, so get mad and say what you want concerning the truth in the story, but so far as I can tell - it's amazing.
Bonus: should you be patient enough to watch past the credits, you will see something that could point to towards the next movie. And leads you to the truth of what really happened to Loki! I won't spoil it for you, but I do want to remind you that Loki is the master of illusion... Also, if you stay for more credits and show the last bit of patience possible... There is further storyline! Can it truly be?! Two lovers just might be reunited....
http://bcove.me/i5l7vvzf
So check it out and tell me what you think!
And just for fun ;-)
Posted by TheNerdyUnicorn