I recently requested a sample from the Wise Company of emergency food storage. The Wise Company specializes in emergency prepared foods that can be stored for extended periods of time.  Have you ever seen Doomsday Preppers? Have you ever considered the possibility that some kind of emergency might arise causing you to rely solely on what you have stored at home?
I know I have. I've been living in a state where hurricane parties are normal and anything less than a category 4 isn't worth worrying about. I've filled up Rubbermaid bins with water, kept a first aid kit in all my vehicles (even my motorcycle), and also try to keep things in the pantry for emergencies.
Food is always one of the most important things to have on hand in case of emergency. There have been many times when the power goes out and canned beans become the main part of your diet. Let’s face it though; you really don't want to be cooped up in a home with everyone eating baked beans morning, noon and night. The smell gets so bad you might just brave the storm outside instead. 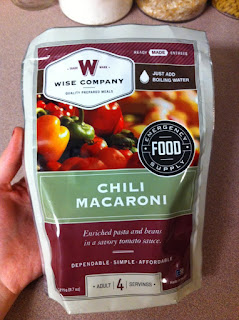 Wise Company sent me a pack of Chili Macaroni that feeds up to four adults. It's 100% vegetarian. You just need to boil 4 cups of water, add the contents in the package and stir. After turning off the heat, cover it and let it stand 12-15 minutes while stirring occasionally. Let it cool and dig in! 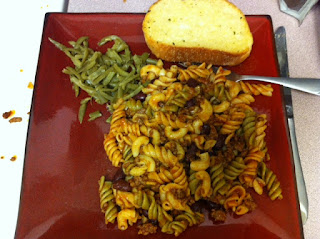 My homemade chili macaroni....
Now, to be perfectly honest, it’s not the greatest chili macaroni I’ve ever had. (I much prefer my home cooked kind.) But when it’s an emergency, this would be the best thing ever for dinner! Food is always on the top of lists during an emergency, so be prepared with something that won’t require a lot of attention or things that go bad without refrigeration. Better than beans and better than MRE's, which I've also had a taste of before. However, while it might taste better than your other options, its still on the bland side so have some hot sauce at the ready. Texture is flat too. 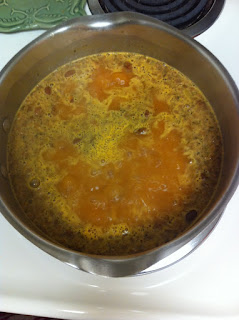 My husband brought up a valid point about how you would heat such a food without electricity? Well, if you have a grill, a pot of water over the charcoals or fire wouldn’t hurt to heat this up. Also, most people around here invest in generators. For people with those, voila! Electricity at your disposal. But only for a limited amount of time until you get it recharged for use. And lastly, option three would be a camp fire. Just remember to keep loose brush, leaves, or other debris away from it. Last thing you want is to start a wild fire and cause more damage. 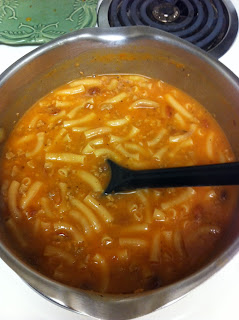 A fully cooked batch of Wise Company chili macaroni.
Your opinions may vary greatly from mine and my family's, so why not contact Wise yourself and request a sample? Leave me a comment on your thoughts about emergency preparedness. What would you prepare for? How would you prepare?